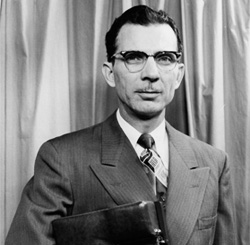 Many of you know that my grandfather, Clay Thompson, DC, was a chiropractic pioneer who developed the drop table. Here is my chance to brag on him a little….
Clay Thompson learned about chiropractic after an accident unloading lumber from a truck at John Deere Harvester Co. Not long after the accident, Clay developed diabetes mellitus. The company physicians could not get Clay’s diabetes under control with traditional medical treatments and eventually sent him home to die. Clay’s father had been helped by a chiropractor years earlier and begged him to give chiropractic a try. Clay had worked in a pharmacy as a young man, so he had little faith that chiropractic could help. To please his father, Clay went to see Dr. James Delk. To Clay’s amazement, he was symptom-free in 16 days. 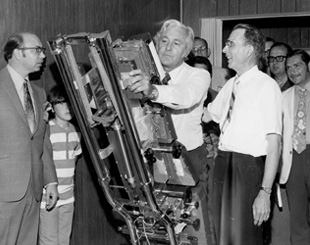 Ten years later, at the age of 37, Clay started chiropractic college. While a student at Palmer, Clay began thinking of changes in the adjusting tables that would allow for a more gentle correction for both the patient and the doctor. Clay was not a large man, never weighing more than 135 pounds. Clay developed a drop headpiece that applied Newton’s First Law of Motion. [ Newton’s First Law: A body is in equilibrium if no force is acting upon it. If it is a rest, it remains so. If in motion, it persists in motion, unless an opposing force is met.] Dr.Thompson was granted a process patent in 1955, one of only 8 at that time for the treatment of human ailments. The first Thompson full-spine table was sold in 1957. 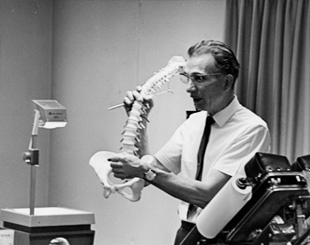 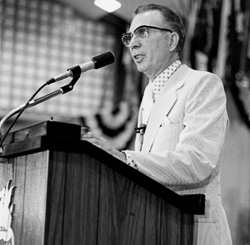 Dr. Thompson used to say that the patient brings the doctor with him when he comes in the office. Chiropractors believe that the body is self-healing and self-maintaining. Your body knows where your vertebrae should be in relation to each other better than any doctor. With the drop table, the chiropractor applies a force into the patient and only when the pad hits bottom is the correction made; not by the doctor setting the bone, but by the patient’s body putting it back in the right place.The chiropractor does not do the healing, but the doctor inside of the patient will heal when there is a correction of a vertebral subluxation.

Get In Touch With Us Today